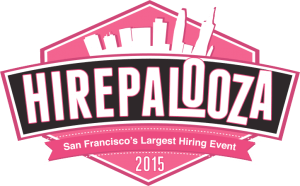 I went to the Bay Area for a couple of days on Monday so I could attend Hirepalooza 2015. I went to the second day of the expo when the expo hall opened and was initially disappointed at the turnout. There were maybe 15 booths, some of which were only oriented towards large businesses, and most of the talks were likewise directed towards businesses rather than individuals seeking work. After mingling and speaking to the people at every booth, I asked an organizer if it would be worthwhile to stay the whole day, or return for the hiring mixer in the evening. They assured me that the hiring mixer was going to be the main event and that a lot more companies would be there.

I went back for the mixer and it almost felt like a different event. Instead of 50 or so people in the expo space, there were hundreds. I got the opportunity to speak with companies and recruiters, and ran into an old friend by surprise. I am glad I went, and it also made me realize that in order to compete, I need a relevant website, thus I am putting some effort into this site now.

I believe it was a worthwhile endeavor. I should start hearing back from the various companies soon, and at the very least, the swag was great!